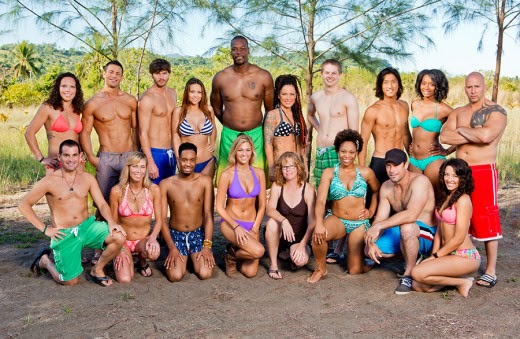 One month from now and another new season of Survivor begins! This time with a twist where players are divided into three tribes: Beauty, Brawn and Brains. After several consecutive seasons with returnees, I'm happy that Survivor Cagayan's castaways are all newbies. Here's my pre-season Cast assessment/ranking/predictions:

18. Sarah
Brawn
Name: Sarah Lacina
Occupation: Police Officer
I already dislike the Brawns tribe because most of them seem boring and Sarah is probably the most boring one. Watching her interview is like taking a sleeping pill with an instant effect. Hopefully, she's got game but so far, meh.
Verdict: Premerge

Brain
Age: 27
Occupation: Pro Poker Player
Seems like an okay guy but his bio, especially his Three Island Essentials answer, screams like he'd be a jerk. He's probably one of the strongest in the Brains tribe though, so I hope he saves them from going to Tribal Council because most of my favorites are in the Brains tribe.
Verdict: Early merge

16. Brice
Beauty
Age: 27
Occupation: Social Worker
LOL. People are already questioning why he's in the Beauty tribe but I keep on telling them that Brice's beauty might be on the inside. Somehow, he reminds me of Colton but I have a feeling that Brice is nicer. He could be hilarious but so far, not a fan.
Verdict: Mid-merge

15. Lindsey
Brawn
Age: 29
Occupation: Hairstylist
Everything about her indicates that she's going to be an early boot. But I remember predicting this on Abi Maria pre show of Philippines and it turned out that I was wrong. It could happen to Lindsey but if her tribe keeps on losing, I'm pretty sure that she'll get voted out early. Also, there's only one room for an iconic Lindsey. ;)
Verdict: Early boot

14. Tony
Brawn
Age: 39
Occupation: Police Officer
Reminds me of BB6 Cappy except Tony is probably the boring version. He doesn't inspire or excite anyone except probably his family. :/ Boring.
Verdict: Pre merge

13. Tasha
Brain
Age: 37
Occupation: Accountant
I think she's very generic. Yes, she's hilarious but I don't see a gamer potential in her despite being in the Brains tribe. I don't think she has the skills of gathering allies and making them trust her.
Verdict: Early boot

12. Jeremiah
Beauty
Age: 34
Occupation: Male Model
The resident country guy. I think he's harmless and I think he can charm the women of the Beauty tribe to his side but I think that he'll be one of the gullible players this season. My gut tells me that he's going to commit a blunder.
Verdict: Early merge

11. David
Brain
Age: 45
Occupation: President, Miami Marlins
Hello Adrian Pasdar. I think he's smart but he might be perceived as devious by his tribe mates because he seems like one, ngl. I actually like David but there are other players that are far more likable than him. Way likable.
Verdict: Pre merge

10. Cliff
Brawn
Age: 46
Occupation: Former NBA All-Star
I'm not a huge fan of famous people playing on Survivor because it doesn't work out well for them. Some go far but it's almost impossible for them to win the game because of their reputation. Cliff seems like another Jimmy Johnson to me, nice guy, but too nice. Will not win.
Verdict: Mid-merge

9. Woo
Brawn
Age: 29
Occupation: Martial Arts Instructor
Asian man on Survivor! Feels like they haven't cast an Asian man since forever. Correct me if I'm wrong but the last one's probably Jonas from One World which is 3 seasons ago. But Woo seems like a unique character. I think he's nice, but I don't think he's that smart to play the game. I think he's going to be an asset in challenges though.
Verdict: Late merge

8. Morgan
Beauty
Age: 21
Occupation: Ex-NFL Cheerleader
Young, big-boobied villain. I like that on Survivor. I'm not so sure if Morgan would be a successful villain like the rumors suggest, but she excites me nevertheless. Her bio is hilarious and she seems not afraid to speak her mind and to cut the throats of her victims. My only problem with her is that I think she's the weakest lady in the Beauty tribe. To be honest, I don't know how she can maneuver in challenges with her amazingly huge melons. Well no, not melons, but WATERMELO_ONS rather. Lucky for her, she could also use these as her instrument to charm her way to the guys or I guess, even with the girls. If she uses them well, then I think she's golden.
Verdict: Pre-merge

7. Jefra
Beauty
Age: 22
Occupation: Miss Kentucky Teen USA
Not only her last name is Bland but she seems really bland at first, sorry for the lack of adjective. Although after watching her video, I'm in her bandwagon! She's very adorable and irresistible and I think that's going to work in her favor. She also has the potential to be very strategic ala Andrea Boehlke and I like my young female players to be strategists so please don't disappoint and do not follow the likes of Allie, Hope and other invisible young blondes.
Verdict: Late merge

6. LJ
Beauty
Age: 34
Occupation: Horse Trainer
Last season, we had John Cody, husband of Candice. This season, I think LJ is the token nice guy. It's always refreshing to see an alpha male on Survivor who's nice and grounded. But as usual, the problem with men like LJ is that the threat factor they possess is very apparent. If LJ finds loyal allies, I think he can go deep in the game. But let's be honest, no one wants to keep a guy like him to the end.
Verdict: Merge

5. Alexis
Beauty
Age: 21
Occupation: Student at Northwestern University
Alexis has already charmed me with her witty tweets. She has the "dumb smart" aura going on with her and I think that it will help her go far and I think she'll have an easy time doing it. She also said that she's going to make "moves" and she doesn't want to get voted out by laying low. That's exciting for me. With her eloquence, I think she has the possibility to become the next Parvati. That's probably a stretch but I believe in her potential and I'm optimistic about her.
Verdict: Final 5

4. Trish
Brawn
Age: 48
Occupation: Pilates Trainer
Winner vibes. She's regal, she's athletic, she's social, a triple threat it seems. I even think that she's probably the next coming of Kim Spradlin. She also seems like she's going to be fun and I hope that she will because I want my favorites to be fun. Being a gamebot is fine but a gamebot with personality would be superior. Thank you Survivor Gods for providing the sunshine in the Brawn tribe.
Verdict: Winner

3. Kass
Brain
Age: 41
Occupation: Attorney
I freaking love her attitude! She's like your friend's funny mom that you love to talk to whenever you hangout in their house. Her 'doesn't-give-a-fuck' personality interests me. She's also not afraid to point out and laugh at her weakness. Basically, everything that I read or hear from her is fascinating. I was also lucky that I already exchanged messages with her in Facebook. On top of that, she compared herself to Sandra and I think she's spot on. She may not have the sassiness of the two-time winner, but I think that she's got similar game with her and possibly radder.
Verdict: Final 5

2. Spencer
Brain
Age: 21
Occupation: Economics Student at the University of Chicago
I keep on telling my fellow Survivor fans that Spencer is our guy. I mean, most Survivor fans probably see themselves in him. Like what Spencer said in his interview, he's not the biggest guy physically, nor a male model. He's just an average, superfan of the game. Also love the fact that he seems like a member of Sucks too, and knows a lot of Sucks' inside jokes. Him mentioning in his bio that he can create shelter with rawks and tighty whities (a possible shade to Debb and Lisi) just sealed the deal that he's going to be awesome. Problem with Spencer though, is that he knows he's smart and there's nothing bad about that but he may not hide that well to his tribemates and I can see that being his downfall. He might be the younger version of Matt Quinlan, or Marty. We'll see.
Verdict: Early merge

1. J'Tiangel / J'Tiamazing / J'Tia
Brain
Age: 31
Occupation: Nuclear Engineer
How can you deny the greatness that is J'Tia Taylor? Star is written all over her face, hair, bikini, smile and dangling earrings. Everything about her is excellent. Out of all the players this season, J'Tia is probably the best candidate of having Beauty, Brains and Brawn. Best thing about it is that she's cast as part of the Brains tribe and she's the main reason why the Brains tribe is my pre show favorite tribe. She also has the potential to be one of my favorite Survivor players of all time. If J'Tia maintains her promise, I do think that she can win this game. I really hope that she's the competitive Amazon woman I think she is because I would be disappointed big time if she turns out to be a failure.
Verdict: Final 2/3


There you have it! My Survivor Pre show Cast Assessment. I'm pretty sure this will change before the premiere though. I'm still waiting for Dalton Ross' interviews and I may do another one before the show airs. That's how I love this cast.
Thanks for reading and let me know your thoughts!
Posted by Jay at 8:11 PM